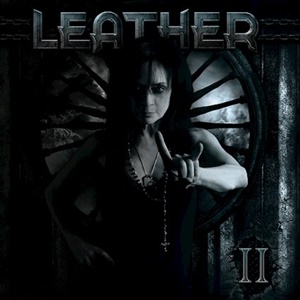 Long before metal advanced to the point where women joined forces with men in the studio and on stage in every conceivable genre, there existed a handful of females during the 1980’s that stood toe to toe with the males in terms of street and public credibility. Leather Leone is one of those pioneers – her work with Chastain well-regarded in the power metal circles. While still releasing records with that band today, she also feels the need to scratch that solo itch – thus the release of II, featuring a killer combinations of heavy/power metal tracks as well as a solid set of musicians holding down the fort.

After a tour of Brazil, Leather assembled a talented group of musicians from that country well versed in her catalog – and the eleven songs for this record reflect her love of classic heavy metal with sturdy power riffs, proper tempo mechanics, and blazing lead breaks that compliment her natural four-octave plus pipes. The formula appears prototypical but well executed – a few heads down riffs of the mid-tempo or slightly faster variety, solid choruses, and thunderous double bass/ entertaining fill passages from the rhythm section, all based in a Priest/Dio mold. She navigates nimbly around a power ballad like “Annabelle” just as comfortably as the fiery, double-bass Riot-ish barrage “Juggernaut” – guitarists Vinnie Tex and Daemon Ross unfurling those key shred/neoclassical breaks and twin harmony licks necessary to keep the proceedings in axe hero glory. My guess based on the quick hitting kick action and lightning fast fill work from drummer Braulio Drumond on an otherwise sedate anthem “Hidden in the Dark” that the man has Scott Travis and Painkiller as a textbook guide for how to approach these songs.

No worries that Leather has lost her edge vocally – she sounds just as deadly as she did thirty years previous, probably sharper to the touch with where her sweet spots are for screams and lower melodies. Check out the versatility during a more commercially enticing “Sleep Deep” or the power cruising riffs that roll into Accept-land for “American Woman” and you’ll be headbanging away as Leather keeps her stance and importance for metal on high. Let’s hope that she has enough time to parallel her Chastain work with more solo outings – as the fans benefit from two sides of her prowess.