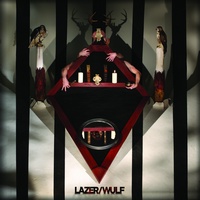 Utterly complicated stuff here, without sounding complicated for the sake of being complicated. (“Why do you have to make things so complicated?” Avril Lavigne once asked.) Poorly-placed Canadian pop references aside, Lazer/Wulf’s The Beast of Left and Right was written to be a palindrome, meaning, as the band so properly states, the album is “Symmetrical. Some songs are other songs backwards. Other songs respond musically to the other songs across from it.” DR does not have the mental capacity nor the time to do a full dissection of this endeavor, but, it’s safe to say the band has a proggy, mathy, and challenge-y album on their hands that should be of interest to many parties.

The band – an instrumental three-piece from Athens, GA – crack back on energetic post hardcore and mathcore runs that rival the subgenre’s obvious outlets, The Dillinger Escape Plan, just without the disregard for human life. Rather, there’s a controlled sort of chaos to the proceedings, one that starts to make sense after about the third listen, which is where the jostling and upfront presentation of “Choose Again (Right Path)” and “Beast Reality (Center Piece)” get their wings and subsequently leave their mark with brash heaviness and technicality. Furthermore, there’s some length to these tunes, some stretching beyond the eight-minute mark, but given the prescribed sonic adventure the band is on, you almost want to take a step back and try to piece together the whole thing. (Which we tried to, and came to terms with after the fifth listen.)

Regardless of how one approaches such a unique album, Lazer/Wulf probably could have sold The Beast of Left and Right as a regular, non-palindrome album and would have gotten their point across. Instead, the band has opened an entirely new dimension for themselves, which of course, predicates the all-too-obvious press clipping that this is one of 2014’s most unique albums. It really is, though.