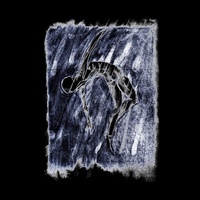 Dense and shadowy black metal is certainly the way to go at this time of year in the northeast regions of the US-of-A. While we’re totally entering into cliché-ville with such alignments, the bleak weather and farewell to sunnier/warmer weather generally thrusts folks into a seasonal depression, even though taking a stroll outside in the crisp autumn air is good for the soul. (Sheesh, this is really turning to something cheesy.) Therefore, albums such as Laster’s Der Verste Verte is Hier provide proper accompaniment for less-than-desirable climate, while at the same time, giving the Netherlands another BM outfit to get behind.

Formed in 2012 and comprised of two out of three members using just their first initial in the credits, Laster hovers around the spacious sprawl of early, quasi Burzum worship-era Drudkh, and the ambience found in bands such as Hate Forest and Woods of Desolation. (Nature names are great!) Not surprisingly, the four songs found on this debut are akin to a long, snow-trudging journey, where ample amounts of dissonant and harmonic pounding lead the way. It’s mostly captivating stuff, especially when the band hones in on repetition, as found on opener “Alles Wat Mij Bevalt Ontvalt Me,” and awesomely-Norwegian “Tot de Tocht Ons Verlicht,” which is where the band’s atmospheric stronghold becomes most noticeable.

Extra nods to the title track, which if you listen closely, has some musical closeness to the band’s countrymen in An Autumn for Crippled Children, who are currently the country’s best black metal band. In turn, lots of nifty, dyed-in-the-wool ideas popping up here on the album’s first three tracks, with an excellent exploratory number to round these off. To these ears, Laster has ample breadth and depth to tackle the ever-tricky terrain that is atmospheric black metal done proper. A sterling debut.