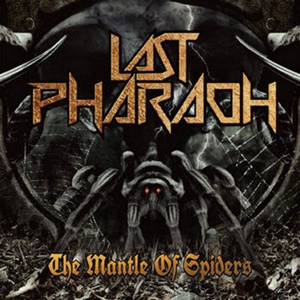 Witness to numerous live performances of Last Pharaoh prior to the release of this album, it’s obvious the quartet’s very talented in their specific niche of progressive, neoclassical-oriented power metal. Now that their debut album The Mantle of Spiders finally hits the streets, the world will become aware of the fiery songwriting and exemplary performances on display throughout these nine songs. Especially if names like Iron Maiden, early Queensrÿche, Crimson Glory, and Yngwie Malmsteen mean anything to your record collection and preferred aural tastes.

The upper echelon note-holding propensities of vocalist Tommy Santangelo become immediately apparent from the opening strains of “Into the Darkness”. The man has serious lung capacity to shriek and scream at will, but also showcase an engaging, personable lower and mid-range sustained delivery – everything from Rob Halford and Midnight (Crimson Glory) to classic Geoff Tate and Ski (Deadly Blessing) comes to mind during “The Headless Horseman” and “Mantle of Spiders”. Bassist Michael James and Ed Shelinsky supply that tight rhythm section mechanics necessary to drive tempos home – locked solid for headbanging efforts such as “Jekyll and Hyde” and “Slave to the Kill (The Son of Sam)”. And then there’s the clear axe mastery of guitarist Ron Toth throughout. Beyond his obvious shredding abilities where he can knock arpeggios into the stratosphere faster than the speed of light, he has the appropriate tasteful knack for choosing the right crunchy rhythms to match Tommy’s range. Check out the powerful “Deadly Dreams” and doomy closer “Psychohouse” for Ron’s versatility, beyond his penchant for Rhoads/Malmsteen action during his lead sections.

For only being an active band since 2016, it’s rare to hear such talent come together so quickly in a couple of short years. Even better, a US band like this should remind listeners that there are still bands willing to pursue progressive, neoclassical power metal that pushes the limits on all fronts while still writing some engaging songs with super killer hooks. The Mantle of Spiders will hopefully be the start of a long, successful journey for these gentlemen.