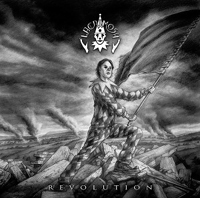 Boasting a sound and style that only European Goth runners would fancy, Switzerland-based Lacrimosa have been able to survive the treacherous Goth landscape for nearly two decades. It’s a feat not to be taken lightly, given how many bands come and go in Goth, yet the duo of Tilo Wolff and Anne Nurmi’s very German approach has taken them in and out of the metal frame, something that is painfully obvious on their 11th studio effort, Revolution. This album reeks of confusion.

The fact that Kreator mainman Mille Petrozza has a guest spot here is an instant head-scratcher. Given Petrozza’s numerous attempts at distancing himself from Kreator’s quick breeze through moody metal on 1999’s flimsy Endorama, it comes as a major surprise he’s involved. In light of that, you wouldn’t know Petrozza was scuffling about, as broad, heavy-on-the-orchestra jams like “Verloren” make for an uneven, but at least fairly captivating listening experience. Even a commercially-oriented rocker like “If the World Stood Still For A Day” has its merit, primarily because of its Irish feel.

Things take a noticeable nosedive on “This Is the Night,” that of which the album never recovers from. Wolff’s attempts at English are futile, as his pronunciation and phrasing are all over the place. The man should take some cues from Crematory singer Felix, who gradually learned to grunt his way through English-sung portions, thus masking his thick accent. Wolff doesn’t do a very good job of it on “This Is the Night” and while one track can’t spoil an album’s broth, it’s definitely a blotchy moment the band would probably like to have back.

The simplicity and ease in which Goth typically operates isn’t apparent on Revolution. For the most part, the album is wrought with conflicting ideas, a lot of which amount to a rather listless affair. Whether its cabaret, plain Goth rock, or the symphonic notions Wolff and Nurmi try to lean on, listening to Revolution is like trying to fit a square peg into a round hole.