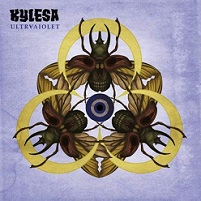 Listening to Kylesa’s Ultraviolet in a bus would be a mistake. The big engine revs and rumbles much like Kylesa’s bottom-heavy brand of sludge-metal and the music is lost. The diesel fumes certainly don’t help either, adding to the headache that is already pounding from the droning guitar and shouted vocals. Apparently this particular brand of all-things-heavy is quite the rage nowadays and surely Ultraviolet has its fans. But to others it sounds like a bunch of teenagers trying to be avant garde in dad’s wood-paneled basement after listening to Down and Clutch for a few hours. They’ve removed the southern-flavor of those bands but kept the dirge-like plodding.

There is irony in opening the album with a song named “Exhale,” as it immediately punishes the listener, not allowing a single breath before Phillip Cope starts yelling. There are both male and female vocals, as Cope shares the microphone with Laura Pleasants. Sadly, neither one is particularly good: Cope just unmelodically yells poor poetry that he seemingly wrote in English class while Pleasants attempts to sound ethereal atop the mix. “Exhale,” “We’re Taking This,”“What Does It Take” and “Vulture’s Landing” are all unrelenting, unremarkable and uninteresting.

Kylesa tries to mix things up, throwing in “Long Gone” – a vehicle for Pleasants’ breathy vocals that features a toned-down Sepultura drum break between a dull up-and-down melody – but it just comes across as flat space-filler. The final two tracks are similarly insipid: the repetitive “Quicksand” and the aptly-named “Drifting.”

Ultraviolet is at its best when the lead duo aren’t ‘singing,’ as shown by the cool groove in “Steady Breakdown” and the low-key “Low Tide.” The latter sees Cope stop shouting for a few minutes, and actually finds a groove that rides perfectly along with the softer tumbling of the bass. Sadly two tracks don’t make an album and Ultraviolet can easily be avoided.