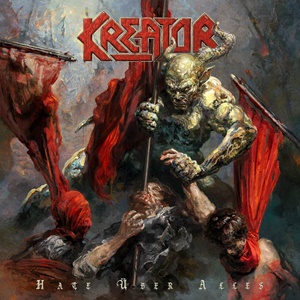 Masters of thrash Kreator may take a little longer to release studio albums than in the 80’s and 90’s – but that’s only due to a vigorous worldwide touring and festival schedule that keeps the bills paid in the modern marketplace. Coinciding with the resurgence of thrash in the early 2000’s, there’s little dispute in the band’s consistency and potency album by album. Starting with 2001’s Violent Revolution through their last studio record Gods of Violence in 2017, their adaptation to advanced production and modern technology without compromising the savage music and principles at hand propels the group to top tier status still in a subgenre almost forty years old.

Which makes Hate Über Alles, Kreator’s fifteenth full-length, another document of substantive quality, adding ten more headbanging tracks (outside of the 58 second “Sergio Corbucci Is Dead” intro) that bring all sides of the band to pinpoint precision with deadly accuracy. Mille’s unmistakable venomous, militant roar rides effortlessly over the top of some twin rhythms from the mastermind and Sami Yli-Sirniö as well as harmony accents and thoughtful, engaging lead breaks that make hair follicles stand at attention, whether going for broke at breakneck speed during “Killer of Jesus” or at moderate paces for the follow-up “Crush the Tyrants”. Lately these musicians reach back into their early British traditional metal influence bank for some Iron Maiden-esque tempo twists and circular runs that allow “Become Immortal” to be a mid-album highlight, citing some 80’s historical reference points in the lyrics. Adroit at proper placement of the catchy chorus or dynamic, melodic nuance during transitions and bridges, the calmer contrasts against the thunder of “Conquer and Destroy” could make this a future steady set staple, while the longest track “Dying Planet” provides a moody finale, filling the sonic landscape with a treasure trove of semi-doom riffs, shifting double kick/snare hits from groove to semi-blast proportions, and a lower register narrative element over its almost seven-minute arrangement.

Noted artist Eliran Kantor develops another winning cover, while Arthur Rizk adds another premiere producer credit a la his work with Power Trip and Sacred Reich, giving the instrumentation and vocals that lively warmth that allows the listener to engage, enjoy, and feel the minor/major details again and again. To these ears, Hate Über Alles takes the best of Extreme Aggression and Phantom Antichrist to 2022 and beyond – proving Kreator is as relevant today at thrash as they were during the explosive 80’s development of the movement.