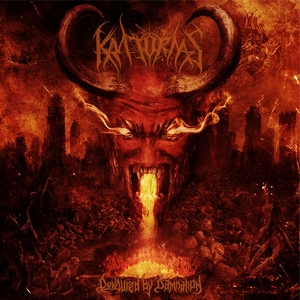 One-man black/grind act Kratornas has been floating around the metal realm since 1995. There has been some dormancy between now and then (the last album came out 7 years ago), and Devoured by Damnation has the added benefit of an actual drummer being hired, as opposed to a drum machine. Your enjoyment of said album though, will ultimately depend upon your tolerance for unbridled chaos.

Chaos can be an absolutely fantastic tool, when in the right hands (see Anaal Nathrakh). Kratornas may not be quite at that level, but the black/grind combo that comes out the speakers has its benefits. It’s a ball of fury, no matter which track you listen to. Some frenzied solos take center stage (“Dead Burning Christ”) and the furious riffs that come out on a regular basis are sure to get the energy pumping through your veins. Likewise, the somewhat old school thrashy approach, which has an Angelcorpse feel at times, is all about going as fast as possible. With this sort of invoked method, there’s bound to be some casualties at the memorability level, but with adrenaline in mind, it’s an acceptable loss. What’s not so acceptable, and what brings the album down a little bit, is the fact that there are a number of instances that see the drums blasting at full gear – completely blurring out the guitar/bass. Controlled chaos is one thing, but the drumming is far too dominant in the mix.

Old school thrash vibes meet up with black/grind riffing on Devoured by Damnation, but drumming tends to get in the way more often than it should. Some may see it as part of the old school appeal, but at the tail end of 2016, it is a sticking point, and Kratornas could have a much stronger sound overall if the sound was a bit more balanced.