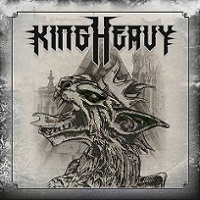 Lest we ever undermine the influence of the Swedish Sabbath, otherwise known as Candlemass. The Leif Edling-led unit essentially brought classic doom into Scandinavia, producing several classics in the process, not to mention spawning an entire blockade of bands who come along in their on-again/off-again career. Therefore, any time a band was a dramatic, theatrical singer in the context of no-frills doom, all signs point to Candlemass and their Messiah Marcolin years, something Belgian/Chilean unit King Heavy clings to ever-so-closely across their self-titled debut.

Vocalist Luther Veldemark is the make-or-break facet of the band. Like the monk-robed one (that would be Marcolin), Veldemark is dramatic to a fault, particularly with some of this vocal caterwauls. He’s breathy enough to fit under the band’s basic, relatively adventurous song constructs, like opener “La  Gargloa,” which snaps into the meaty power chord realm that Candlemass has lived in since like, forever. Veldemark certainly has his big moments. The surging “As Dawn Broke the Day” finds the man fully under control in an open, well-spaced tune that gives him ample room to story tell, elaborate, and be all huffy and puffy. He saves the best for last on album closer “He Who Spoke in Tongues,” an 11-minute epic that chimes the doom bell, heads down to the gallows, and meets the maker all in one fell swoop.

There’s no way King Heavy is going to be able to work around the Candelmass comparisons. Heck, they might even bring in the Solitude Aeternus crowd based on association alone. Yet, if you’re looking to pound the road for hardened, weathered, and promising doom, then King Heavy has got it going ‘on. Doom influence-sleeve-wearin’ at its finest.