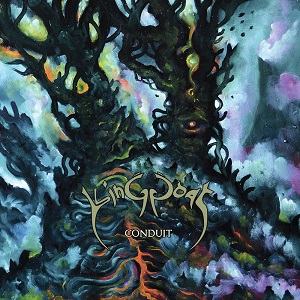 After its March 2016 release, King Goat’s Conduit received a flurry of nice reviews, which, for an independent band, has to be heartwarming. Since King Goat are a British epic doom band, you’d think it was enough for them to break to their steely, all clouds demeanor. The band was appropriately cited for its diversity on all flanks, in particular the vocal flexibility of one Anthony ‘Trim’ Trimming, who can go from earthy grunts to soaring highs. Aural Music, the home of Fen, Hall Spirit Noir and Negură Bunget, wisely snapped up King Goat to release the follow-up to Conduit, but first things first, a reissue of Conduit was in order.

Featuring revised cover art and three tracks tacked on from their 2013 self-titled EP, the reissue of Conduit puts King Goat’s sonic expanse in full view. While some have thrown around the “progressive” doom tag toward King Goat, we’d rather think of their sound to be in line with glory-era Candlemass and Solitude Aeturnus, along with gentle nods to Irishmen Darkest Era. On the title track and “Revenant,” Trimming pulls it all together, displaying a vocal versatility we often don’t find in newer bands. His vocal lines are clearly well thought-out, remaining clear and catchy, all the while avoiding some of the usual doom vocal trappings.

So yes, of course, these songs are big, long doom strokes, with the riffs working off of each other, finding sanguine grooves. It’s an ultimately king-sized record with a few quibbles and stumbles, which is exactly how a band from Brighton gets signed and prepped for the doom world at large.