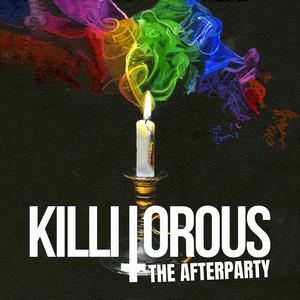 Who says that tech death can’t be fun? Killitorous brought the energy with 2014’s Party, Grind and have apparently brought enough of it to supply The Afterparty as well. Given a roster of members who also play in acts such as Annihilator, Suffocation, and First Fragment (to name a few), it’s obvious that musically speaking, they can stand toe-to-toe with the competition. Add in the fun factor, and you’ve got a reason why the band stands out.

As already stated, the tech fusion is there and there’s certainly some appealing pieces to the band based on the musicianship alone. But they don’t let it be the sole purpose that many other like-minded acts do. What you’ll notice is that in addition to some stellar tech, there’s also a few melodies per track that happen to stand out. It could be an enjoyable lead (“Eat Your God Alive”), an old school thrash infusion (“Re-anima-tomatron”) or a killer groove (“30 Minutes”). Or maybe it is just that thrilling blast and speed explosion that’s peppered with tech-riffs (“Married with Children”). Either way, the energy is palpable and contagious as they rip through tracks in a playful manner. The band does use a number of samples/soundclips throughout the album, which could make it or break it for some – but for the most part they don’t go on for too long and are an amusing distraction. That said, the album closes on about 5-minutes of The Joker’s death-laugh from Tim Burton’s Batman looping, and that’s something that will haunt your dreams if you endure it.

Without even going into the lengths to discuss the massive number of top tier guest contributions, there’s quite a number of reasons to check out The Afterparty. For the tech death enthusiast that wants something with a little more flavor and energy, you’ve found it in Killitorous.