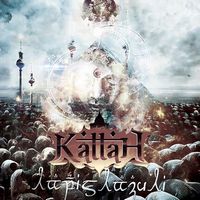 Mr. Roy Z is involved here, which gives Kattah automatic credence, for it’s not like the ultra-successful producer takes on just any random project. The man’s production career shall forever be defined by his work with Bruce Dickinson in the late 90s, where he helped the Air Raid Siren effectively surpass his old band, and, his time with Rob Halford a few short years later for the commendable Halford albums. But a new(er), unknown band like Brazil’s Kattah probably whets his whistle a bit more these days. And based upon Lapis Lazuli, getting these guys to the next level won’t be as easy as The Chemical Wedding.

Melodic metal with somewhat of an exotic flair is the deal here, which immediately suggests these guys are Angra clones, which they’re not. They certainly don’t possess the same technical pedigree, nor the bountiful arrangements, but such comparisons aren’t totally unfounded. Vocalist Roni Suauf, surprisingly, has a Todd LaTorre-esque tone to him, which suggests the new Queensryche singer has already made it to such levels of aping, although Kattah formed in 2006, so this probably coincidental. Either way, Suauf’s timbre and note selection certainly resemble LaTorre, especially when he goes for those soaring highs and emotive choruses, which there are a-plenty here. That being said, the choice cuts include “Inside My Head,” “The Hidden Voice,” and the closing jam, “Last Chance.”

By no means a dud, Lapis Lazuli really doesn’t have the chops or bravado to become anything more than a stock power metal album. Granted, Roy Z hanging around for this will certainly give Kattah a nice little bump in the promotional and/or name recognition department. Such things usually go a long way in the popularity contest that is the metal scene. Same goes for good songs.