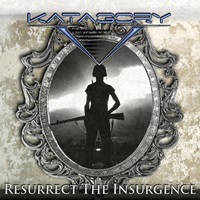 The Internet giveth and also taketh away. Proliferation of free/streaming music opportunities has certainly widened metal choice for the consumer over the past 15 years – but at the detriment of long term career sustainability for the bands and musicians. Salt Lake City, Utah’s Katagory V would be a clear victim of torrent/blogging sites serving up their previous four albums, while the band struggled to sell enough physical product to offset equipment, production, time, and energy costs.

So due to a less than enthusiastic response to a crowdfunding campaign, their fifth (and final) studio album Resurrect the Insurgence is available purely as a digital product on Bandcamp. Such a shame too, as this quintet have always been one of the more versatile progressive metal acts from the US scene – and this 10 track, 61 minute record continued that outlook, becoming a fitting epitaph to their discography. Those who expect Fates Warning-esque material that features tight tempo changes and stunning guitar harmonies/rhythms will find “Crash Down” and “I Am Change” delectable, especially if you miss the Parallels and Inside Out period of Alder-era FW. On the flip side you’ll hear one of the heaviest Katagory V songs ever in “Sinister Seduction” as well as the band flirting with AOR-tinges in terms of vocal and musical harmonies on “My Insurrection”.

For his vocal debut in the band, Al Rybka gives this material additional multi-faceted substance, a true progressive singer as he can hit everything from classic Geoff Tate to Ray Alder – check out his lower register during the quieter “Sins of the Son” and soaring eagle note abilities during the 9:26 “The Search for Control”. Gaining the mixing/mastering experience of Dennis Ward, the production skills of bassist/guitarist Dustin Mitchell are exemplary, standing toe to toe with the best from the late 80’s to mid-90’s progressive metal platters.

Finally hitting the market 5 years after recording, Katagory V fans should be proud that Resurrect the Insurgence didn’t end up solely in the hands of the band. ProgPower followers worldwide – support talent, support hard work ethics, support their cause as great records remain timeless.