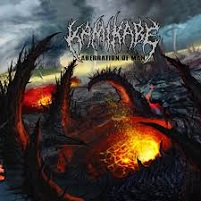 A local band done good – it is definitely a nice claim to be able to make. Especially being from a city such as Pittsburgh, where the local metal scene is a bigger laughing stock than Pauly Shore’s career choices. There are a few standouts, however, and Kamikabe is definitely one of them. Though one cannot make the claim that they’re a “local” any longer, after signing a deal

with Unique Leader, touring the country, and releasing their first album, titledAberration of Man.

Ever since their first demo in 2009, Kamikabe has been a band that has steadily gotten better. Having seen them multiple times, each show always seemed to be better than the previous. And having seen them very recently on the local stop on the previously mentioned U.S. tour, they again have improved, becoming tighter and more formidable. But enough of that – lets get to the disc.

Kamikabe are a form of very fast and well-derived technical death metal, and not the kind that – for the most part – play difficult arrangements for the sake of it. Think more of an Obscura meets Psycroptic’s schizophrenic riff arrangements type of deal. “Leprous Divinity” is a prime example of what the band is all about – blazingly fast and very tight, all the while with lots of chops and arrangements that will stick with the listener. “The Rot” begins with galloping guitar attacks, which quickly transform into an abundance of quirky leads that even a Necrophagist fanboy could appreciate. “The Process Within” is one of the heavier tracks on Aberration of Man and is definitely for those who want a song to smash things to, while album closer “Ungoliant” is a seven minute-plus long instrumental that displays Kamikabe’s ability to slow it down a bit and write something that has more time to breathe. One of the best tracks on the album, actually, and would definitely like to hear more of this sort of style from these guys.

If there’s a complaint to be had, it is that at times the band fall into the pitfall that a lot of otherwise talented tech death bands stumble into – occasionally some songs run together a little too much. Some more variety in the band’s songwriting could put them into the stratosphere. And there is differentiation on this album, however, more would go a long way.

Kamikabe is a solid up and comer, with Aberration of Man showing off the band’s technical prowess in spades. There isn’t a dud on the disc, and it’s an admirable first effort from a band that has proven to continually improve finely over time. This album is night and day from their first demo three years ago, so there’s no doubt that the upward trend will continue. All they need to do is hone their skills, keep upping the creativity, and they’ll be a well-known force.