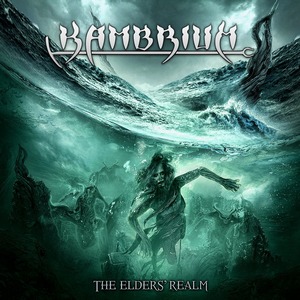 Melodic death metal that hits on the symphonic and power metal side is by no means uncharted territory. But that doesn’t stop bands like Germany’s Kambrium from giving it their all, honing in on what makes the genre work. Their third album, The Elders Realm, sees the band continue to push the symphonic/power elements further into their sound and fuse the two sides closer together.

There are plenty to pick from for those up for a game of the “sounds like” game with The Elders Realm. Everything from Children of Bodom to Amorphis to Epica quickly come to mind, with the band’s flair for the more symphonic elements (and slight folk-isms) shining brightly in each track. It’s catchy, it’s punchy, and for the most part, an upbeat ride that you can listen to and get a deathly grin from it. Midtempo crunchers like “Colossus of the Seas” and the title track seem to fit the feeling best, being able to best service the melodic demands, though faster cuts like “Conjure the Lost” do a good job of diversifying the flow. As does the use of clean vocals from track to track – never going into the predictable “clean chorus” syndrome that some bands employ. If there’s one fault to be had, it’s the length of the album (slightly over an hour), which itself suffers from a 13-minute closer (“Furious Decay of a Dying World”) that seems just a little too long. This type of album is one that feels strongest at a lower runtime (maybe 45-ish minutes), as the ideas begin to start melding together as it continues along.

Despite a bloated runtime, The Elders Realm is not without its perks. A nice use of synths to elevate the moods and clean vocals to keep things pleasantly diverse – suitable for an album that keeps things surprisingly heavy given the upbeat nature. It may be more or less the standard fare in some ways, but they do a good job of crafting melodies that will stick with you.