Juggernaut – Out of the Ashes (Art Gates Records) 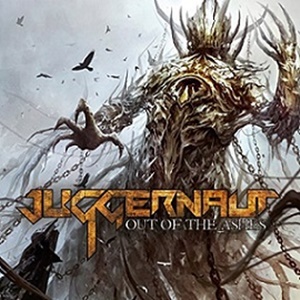 Ardent metal followers probably associate Juggernaut as one of the 80’s Texas guard that put that scene on the map – signed to Metal Blade with their brand of technical speed laden thrash for Baptism Under Fire and The Trouble Within released in 1986 and 1987. This however is a newer band from Spain, as Out of the Ashes is their debut album, and stylistically the quintet has more in common with current groove-oriented metal with splashes of thrash thrown in for diversity’s sake. The rhythm aspect becomes the focus of this material, the guitars and drums locking into a jackhammer-oriented groove, while much of the hooks occur organically out of a Pantera/Machine Head/ Lamb of God-like mold.

“Vishnu” opens the record through an 80 second, atmospheric instrumental – the layering of guitars building up the tension and impact of what’s to follow – as the proper follow-up “Eye for An Eye” assaults the senses in thunderous abandon, the double bass and speedy rhythms a call to arms for all groove/thrash maniacs worldwide. Accents, squeals, half-time maneuvers, down-tuned action are all incorporated into the Juggernaut plan – as well as the occasional clean melodic switch-up for vocalist Javi Perera which works out quite well in a modern rock context for “Beyond Thunderdome”. Occasionally the reliance on guitar effects can get a tad overbearing – it’s as if the wah wah gauge has been engaged to eleven, where the band dangerously veer into that Five Finger Death Punch side of commercialism. Thankfully, the weight of the riffs and aggression as far as the rhythm section keeps Juggernaut on the correct course – “Dust to Dust” reliving old Machine Head, while “Scavenger Hunt” crawls into that lower-end groove scale with stunted riffing and keyboard flashes for dramatic, heightens sensory effect.

Closing on a surprising note with the Judas Priest classic “Jawbreaker” from 1984’s Defenders of the Faith record, Out of the Ashes keeps Juggernaut on point, heavy enough to gain credibility from a wide swath of metal audiences. A band to watch as the growth potential could be massive.