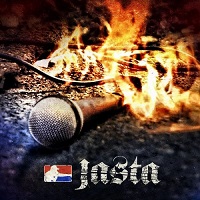 Resident “face” of hardcore, Jamey Jasta’s first solo album can’t been seen as an album where Hatebreed throwaway ideas go to die. In fact, the cleverly-titled Jasta has more melodic vocal hooks in the span of one full-length than Hatebreed has doled in its entire career, thus making the clear and necessary divide between not only the two acts. Now, whether people can get down with Jasta doing some actual singing is a whole other bag of chips…

More impressive than anything is that Jasta played all the instruments, proving to be quite the competent guitar player (see the gnarly triplets on “Nothing They Say”) and drummer (double-bass galore on “Walk That Path Alone”). The baby-faced singer knows his way around a solid song construct as well, rarely veering away from the verse-chorus-verse-chorus structure, thus providing some rather anthemic moments during “Anthem of the Freedom Fighter,” a song that is perhaps the only one here that is directly in Hatebreed’s wheelhouse.

No real beef with Jasta’s singing voice, as it sounds like an extended version of his regular shouted vocals. “Mourn the Illusion” and “The Fearless Must Endure” are proof positive of this, with Jasta hitting a sing-songy feeling over a nice run of harmonized guitars. A few guest appearances prop the album up, including All That Remains vocalist Phi Labonte helping out on “Something You Should Know,” Lamb of God’s Randy Blythe gets in on the act during “Enslaved, Dead, Or Depraved,” while his LOG cohort Mark Morton lends some leads to closer “Death Bestowed.”

Infinitely more varied than anything Hatebreed or Kingdom of Sorrow could produce, Jamey Jasta’s first solo go-round can be considered a success simply because he managed to get out of his comfort zone. It would have been mind-numbingly easy for the man to plop down some beatdowns and generic hardcore anthems to appease the far-reaching Hatebreed fanbase, so if anything really was accomplished here, it made the build-up to the band’s next full-length more sizable. A marketing whiz you are, Jasta.