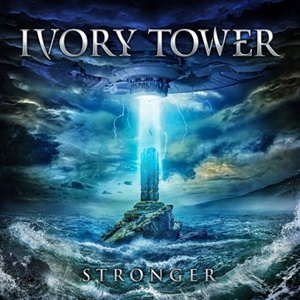 A blast from the past here – German power/progressive metal band Ivory Tower hit the scene in 1996, issuing their first two album on Limb Music Products before shifting to Remedy Records in 2006 for the IT effort. They’ve been silent since 2011 on the recording front – lineup changes being a huge component of their realignment. Returning to the drum position is Thorsten Thrunke, last seen in 2002 with the group – while gaining keyboardist Frank Fasold and latest vocalist Dirk Meyer. But do not fear my friends, as Stronger indeed keeps the quintet’s melodic power/progressive metal template intact, delivering a lengthy effort to make up for lost time.

The inherent juxtaposing nature to Ivory Tower song to song speaks volumes to the diversity of influences: thrash, power, modern groove, even melodic rock beyond the obvious progressive nature keeps listener engagement on high. Gamma Ray-ish power gallops and uplifting riffs give chase to a more mid-tempo transition during “End Transmission”, where Dirk’s emotional range and fierce disposition appears as well as Thorsten’s energetic time signature transitions. The modern edges a la Pagan’s Mind, Megadeth, and Firewind come out in the aggressive and darker tones from guitarist Sven Böge as well as the supplementary sound effects/narrative aspects – most evident on “Money” and “Life Will Fade”. These musicians aren’t going to assault you musically from the trickiest, technical sides – they prefer to make the twists subtle and measured. Check out the bass action and lower, filtered vocals during “In Me” that conveys a slower, building groove nature while the whispered background voices give Dirk that much more magnificence to carry the haunting melodies to dynamic proportions. The shortest track “Flight of the Dragon” is a 2:28 acoustic-driven instrumental, the lead passage over the primary part very beautiful and breathtaking – while the longer “Passing” features spirited keyboard lines and some upper echelon power in the vocals to give the listener some energetic propulsion at the right time.

While understanding the band has been away eight years between studio albums, at twelve songs and 76 minutes, Stronger could have been a little ‘stronger’ for lack of a better term if it was a tad bit shorter – as there is a lot of content to consume and most people aren’t going to carve out the time to do so consistently front to back in one setting. The concluding “One Day” at 12:22 isn’t a bad song per se, it’s just not an epic that reaches “Metropolis” or even “Stargazer” quality, and probably could have been a track set aside for the next album.

In the end, it’s nice to have these veterans of the German power/progressive metal scene back on the horizon – and filling in that melodic slot that bands like Threshold and Circus Maximus cater to.