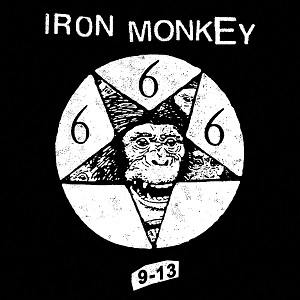 Oftentimes labeled as the U.K. counterpart to Eyehategod, Iron Monkey were off and running by the time the previous century was coming to a close. Their 1997 self-titled and ensuing 1999 Our Problem efforts had created an ample ruckus in the U.K. underground for its brand of nihilistic, almost antagonistic sludge. Whereas Eyehategod and their NOLA buddies appeared to be more concerned with getting stoned and jamming out, Iron Monkey were looking to get f’d-up and wreck the place. That’s how they sounded. The band would hang it up prematurely right after the release of Our Problem and the 2002 passing of vocalist John Morrow put the band to rest for good…or so it seemed.

After writing some riffs in the Iron Monkey vein, guitarist Jim Rushby set about to reactivating the band. Joined by one-time Iron Monkey guitarist-turned bassist Steve Watson and new drummer Brigga, the band’s new 9-13 effectively picks up where Our Problem left off. The songs remain disjointed, like sludge jigsaw puzzles, heightened by a rather monstrous guitar tone. And while there are relative moments of groove and swing found on the title track or “The Rope,” 9-13 remains confrontational throughout, especially as Rushby prowls and marauds like a madman. (Sure enough, he’s taken to wearing a mask in the band’s promo shots.)

Age, it appears, has done little to wear on Iron Monkey’s cynical and isolationist stance. Really, it’s pretty easy to picture these gents up in people’s faces, making them uncomfortable and ultimately, get up and leave. That’s they kind of band they are. 9-13 doesn’t change that; it simply reinforces it.