Invertia – Another Scheme of the Wicked (Ohm Resistance) 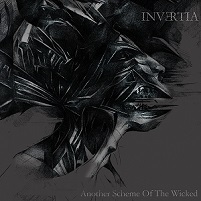 An industrial black metal outfit featuring the pair of Dave Coppola (guitars/vocals) and Tim Winson (drummer/programming), Invertia would initially best translate to Ministry backing their way into Scandinavia, or, Scandinavia backing its way into Ministry. While there isn’t an unforgiving stream of machine gun-like guitars from the duo, the diabolical angle, coupled with the prerequisite sampling puts Another Scheme of the Wicked (their second) into something near or around that territory. And, if we want to go on the granular side, Invertia has managed to making something out of the long-discarded industrial black metal template that is unique, and, redeemable.

The album’s approach veers off the beaten path, too. Comprised of five originals, then five remixes of the originals by the likes of Justin K. Broaderick of Godflesh/Jesu, along with unfamiliar names such as Submerged and End.User. Since bands normally wait to do a remix long after the original release, Invertia’s approach is one of risk. However, the original constructs demonstrate they should best be left alone, specifically “Cross-Eyed Christ,” which is an exercise in industrial extremity coupled with black metal rasps. The droning “Hourglass Without Sand” is a winner, particularly thanks to its tempo change-up, while “They’re Everywhere” rounds up noise-based elements for the album’s best moment.

Perhaps best suited divided onto two discs, Another Scheme of the Wicked does ably give Invertia a platform for their unseemly blend of sonics. Definitely not for everyone, but heavy and occasionally sadistic enough for repeated listens, Another of Scheme of the Wicked is one of the few albums that doesn’t make the pairing of industrial music and black metal seem like a waste of time.