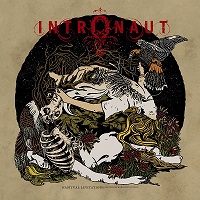 Progressive metal (well, progressive <insert genre here>) is a polarizing beast. On the one hand there are groups that use the inherent musical chops required by the genre and infuse it with a left-field stance of songwriting, and these groups wind up releasing all manner of beautiful things (Cynic, Scale the Summit). On the other hand there are times when the chops are the focal point and everything else is left by the wayside (Dream Theater a lot of the time). For Los Angeles-based Intronaut, the first camp is the only camp that matters, for Habitual Levitations is a gnarled and often times gorgeous foray into the possibilities afforded by a combination of technical prowess and texture.

The vibe here is one of clean and unorthodox melody, trance-like heavy sections giving way to angular and bass-heavy (goddamn that bass playing!) clean sections, blanketed by clean vocals and the occasional tribal-born drums, as in the wonderful “Step.” While every instrument comes across in a clean and beautiful fashion, enough praise cannot be heaped upon bassist Joe Lester, who almost outshines everything else here with his consistently upfront and melodic work, whether in the aforementioned “Steps” or dreamy album centerpiece “Milk Leg.” Fuckin’ seriously, that song could play for days without diminishing returns setting in.

Surprises abound throughout the album, exploratory jazz elements meeting and marrying with progressive structures and moods. Tool-like in spots and Astra-like in others, these comparisons are ultimately moot, for the voice of the band is more than unique enough to stand on its own, free from links to the outside world. The songs are lengthy and stuffed with movements but they never become overburdened or overlong, even the longest “The Way Down” uses its nine minutes to great effect, closing in a legitimately unnerving fashion. I can pile on descriptors all day but in the end they won’t matter, Habitual Levitations requires your undivided attention and will repay it in turn with hours of blissful nuance.