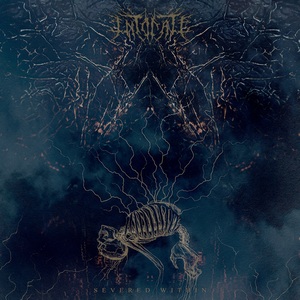 A few years back, Intonate unleashed their debut in the form of The Swerve. A twisting and otherworldly piece of tech/prog death that held equal ground in more dissonant waters. Since that time, the band has teamed up with Willowtip Records (their first was an independent release), and we not sit with the first partnership in that area with Severed Within. An album that is heavy in not only riffing but atmosphere.

Taking that sort of eerie, dissonant feeling of an act like Ulcerate and combining it with a more progressive and technical base, Intonate’s sound can take some time to resonate due to its density. But the effort is a worthwhile one, as the band seems to take pleasure in crafting songs that balanced by dark, moody introspection and fiery eruptions of riffs and violence. Despite their length, the songs don’t really flounder around too much – it’s more about crafting the mood of each of the five tracks here (which fluctuate between 6 and 9 minutes). The shifts between the two sides keep the songs moving ahead, offering moments of murkiness and dread that suddenly sparks a sense of terror as the speeds quickly accelerate (see “Prolong”). The technical stuff isn’t too pronounced either. It’s the sort of thing that you can easily dig into and explore, but if you would rather just be moved around by the waves of dissonance, you will have just as much of a solid time with Severed Within. It makes it more like an added bonus to bring you back for more listens as you want to dissect it down further.

Intonate manage to make monstrous and monolithic soundscapes and keep them accessible to all walks of extreme fans. It also checks off boxes for technicality, atmosphere, and sheer heaviness without succumbing to trying to be too much at once. Severed Within is an impressive and immersive piece of death metal.