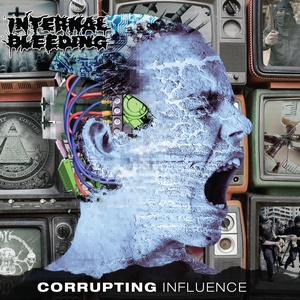 One of the perpetual underdogs within the extreme metal scene, Internal Bleeding have followed in the footsteps of other New York brutal death metal bands for over 20 years. 2014’s Imperium served as a solid welcome back, but the band was handed a tragic blow when drummer William Tolley died fighting a fire last year. Corrupting Influence stands as the band continuing to do what they do best – slam and groove.

Internal Bleeding has always incorporated some slamming elements into their material (they are considered to be one of the purveyors of the sound after all), but with the good sense to base entire songs around them instead of just going from chug to chug with the stuff. Nothing has changed with Corrupting Influence. The grooves hit hard and with plenty of splendor. “Surrounded by the Inside” is a perfect example of how they take a good, mid-tempo chug and insert some subtle melodies and interesting riffing around it, then go for the throat with a bludgeoning slam that has been entirely worked into the track. If anything, the band’s use of melody has done nothing but gain momentum, providing more catchy moments outside of ‘sick grooves,’ and giving the songs more life. “Unreality” slows itself into some unexpected atmosphere, as does “Fatal Dependency,” but without going overboard with it. Solos also fall in line here, with “Focus” standing out as a favorite with a memorable lead that gives a nice contrast to the brutality surrounding it.

Some slight tweaks and modifications to Corrupting Influence ensures that Internal Bleeding have kept things fresh. While it may not be groundbreaking or a complete switch-up, they continue to bring out the brutality without compromise. A palette that’s more diverse than some may expect for a slamming death metal band gives them the edge, and it’s precisely why they continue to be an underground favorite.