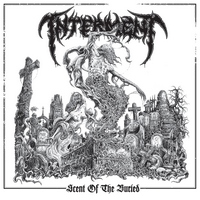 Do you like Dismember? Even though here in 2016, you have umpteen choices to fulfill your old school Swedish metal fix (Entrails also comes quickly to mind), don’t be quick to write-off Interment just yet. As with some of the stronger output of this genre, it’s done by those who are veterans to the scene and understand what makes it tick.

Interment check off all of the boxes of a retro Swedish death metal act, but it’s done with such force and precision you’ll easily forget about it as you listen. Featuring members with resumes with acts like Centinex, Diabolical, Uncanny, and more, there’s an already mentioned strength with the band taking their experience and taking what works. They operate at the mid-tempo range and faster for the most part, relishing in bombarding the listener with frequently thrashing and subtly melodic tones. Occasionally they just pull out all the stops, such as “Skull Crushing Carnage” (one of the year’s most well-chosen song titles), and deliver full-on mayhem. There’s also some moments of groove to allow a slight breather with “Dawn of Blasphemy.” They also got Thomas Skogsberg to record and mix the album at Sunlight Studio, giving it that “little something special” in regards to authenticity, alongside that HM-2 crunch. Lastly, vocalist Johan Jansen is a near dead-ringer for Matti Karki, furthering the Dismember comparisons but it’s more of a compliment than it is a drawback.

Though it seems that the metal genre is being beaten to death with bands trying to play the Swedish death metal of old, Interment completely nails it on Scent of the Buried. Proof that with enough energy and authenticity you can still pull off a sound many feel has been overdone and make it feel fresh and appealing. Don’t let this one slip through the cracks assuming that it will be the ‘same old song and dance,’ this one is a ripper.