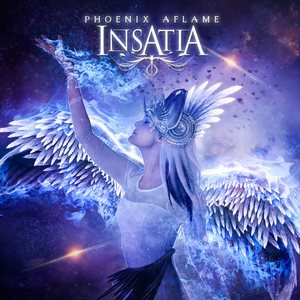 American/Canadian power metal act Insatia first dipped their toes in the water with 2013’s Asylum Denied. While it slipped below the radar of this scribe, it clearly made an impact – signing with Pitch Black Records and dropping a plethora of guests to this second release (including Apollo Papathanasio, Chris Amott, Christian Hermsdörfer, and more). Phoenix Aflame sounds like a band that is ready to make their mark, and be sure it leaves a lasting impact.

There’s nothing overly complex about Insatia’s approach but they have all the necessary elements and can exploit them for their best usage. First and foremost, despite what assumptions you may make based on the cover art, this is power metal with some synths included – not symphonic metal. Some heavy riffing should make that clear, on tracks like “Healer of Hatred.” Symphonics are relegated to a support act (adding a pleasant layer without being obtrusive – see “Angel of Mercy”), and it gives the band more punch than you might expect. There’s a few modern elements in the synths when they pop up (“Memory of a Sapphire”) but they fit well in the mix. Riffing rules the roost for the most part, with ripping numbers like the title track and more melodic cuts (“Sacred”) both providing strong hooks as well as some great soloing. The songs are around 3-4 minutes for the most part, and Insatia melt these songs down to their essence – not a note is wasted. Lastly, there’s the band’s ace in the hole – vocalist Zoë Federoff. She never goes operatic, but keeps things grounded in a more rocking vibe that she can mellow out on with tracks like the folk-ish “Velvet Road.” Her soaring vocal performance takes the songs and gives them an extra level of potency and emotion.

Great riffs, strong melodic vocals, and some concise songwriting chops make Phoenix Aflame an impressive release. Insatia have found how to make the genre work in their favor, and make it an invigorating listen. No reason that this shouldn’t make them one of the summer’s more buzzworthy acts.

Insatia – Rising from the Flames