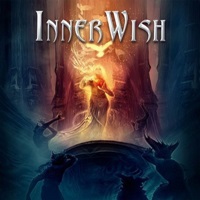 Many would consider Germany number one in power metal support – but to veterans like Blind Guardian and Iced Earth, Greece would rate just as high in terms of undying adulation from fans. They support their domestic musicians just as well – take the sextet InnerWish who have been in the game since 1995, and on their fifth studio platter. InnerWish is the first album in six years due to significant lineup changes in the drum and vocal departments (the latter taking a couple of years to resolve), deciding to premiere the new incarnation through two tribute album appearances of Black Sabbath and Warlord before getting down to the business of this record.

Diverse in their melodic power metal approach, the twin guitar interplay between Thimios Krikos and Manolis Tsigos has more of a darker, thicker edge than most in this genre – think Tad Morose or even Evergrey when you get an earful of anthems like “Modern Babylon” or the mid-to-late 80’s ethereal Queensrÿche feel of “Through My Eyes”. When the keyboards come into focus, George Georgiou has a dual hook and atmosphere role for InnerWish that works brilliantly on the driving “Zero Ground”. Occasionally leaning towards a semi-power groove nature during the first riff hook for “Machines of Fear” – the epic/stunted tempo gives the arrangement that deeper and exotic, cultural nuance that should get toes tapping, hands clapping and devil horn salutes.

George Eikosipentakis probably is a relative unknown in the scene, but his bluesy, soaring pipes will garner major kudos from critics and fans alike. A raspier Russell Allen or even aspects of Paul Shortino (Rough Cutt) circle my brain matter on cuts like “My World on Fire” or the Dio-oriented closer “Tame the Seven Seas” that gains even more of a theatrical feel through its use of background choir vocals. While the lyrics (mainly tackled by drummer Fragikos Samoilis) certainly spin from a positive/ enlightened viewpoint, the personal insights and thoughtful expressiveness put this past any blatant Stryper-isms – ‘deception cannot veil my dream’ in “Serenity” a standout line to this scribe.

Only bug-a-boo to this outing is the dreaded ‘more is more’ 13 songs in 69 minutes you’ll get – that can be too much information in one sitting, and we all know that not every track is a full-blown winner. In the end, InnerWish puts InnerWish back on the radar for strong Euro-power metal in a darker, heavier niche while still containing the proper melodies and hooks for cross-pollination market share.