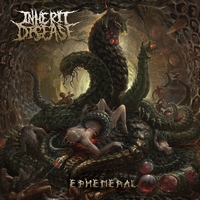 Brutal and technically-laced death metal from Unique Leader. Over the last few years, that’s usually come to mean some high quality material (though there have been a few exceptions). Inherit Disease has been with the label since 2006’s Procreating an Apocalypse, but production issues really keep the band from putting on their best face for album number three.

Those who like their metal akin to Suffocation or other NYDM-styled bands should find plenty that Inherit Disease has to offer. Plenty of nods to Effigy of the Forgotten without being overtly derivative alongside a copious helping of modern brutality should lead the band right to the forefront of this writer’s taste buds. However, elements of the production are frequently too dismal to overlook. First off, the snare sounds it was snapped out of the ‘90s and constantly grates on the nerves since it is so high in the mix. Then comes the vocals – burps, growls, and gurgles that are all quite proficient but in combination with the drumming, sit too high in the mix and practically blur any and all other aspects of the music. It’s often difficult to appreciate what should be top-notch riffs when the vocals and snare take up so much of the available space. It’s a real shame too, since what doesn’t get lost in the mix is some real crushing and impressive stuff.

If you can look past the follies in the production area, Ephemeral could be a meaty slab of death metal. However, it’s almost rendered unlistenable unless you really want to sit down and concentrate on it. With the sheer volume of material out there, it doesn’t seem worth the investment. An album like this should be a pleasure, not a chore to listen to.