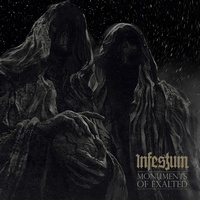 Really hard to keep track of this one, “Infestum,” from “Infestus” for some reason. Granted, infest is quite the metal term, so it’s hard to keep bands away from it (a quick search will find no less than 7 bands on Encyclopedia Metallum called Infest alone – let alone the variants such as these). Name complications aside, Infestum brings us their third black metal offering since their inception back in 2000.

It’s easy to pull the Emperor and Behemoth influences out of Monuments of Exalted. The band’s affinity for warlike blasting countered by majestic pianos/keys has a savage yet graceful feel. In someways, it also sounds like a more black metal themed Sirius (alongside the occasional industrial vibes as well). Needless to say, there’s usually a bit going on in each track. Take “Obsidian Exile,” which offers up some melodic riffing with some industrial effects and synth noises alongside some more “Armageddon is coming” moments of monstrous, blazing riffs.

The problem is that if you take away the effects, there’s not much separating Infestum from the rest of the symphonic black metal grouping. They get a few points for the occasionally creepy/majestic sounds that grab ahold of you, but the riffing seems a bit cold and calculated. Nothing really stands out upon repeated listens other than the atmosphere.

If you are into the Emperor-themed symphonic black metal, you can do a lot worse than Monuments of Exalted. However, you aren’t going to walk away from this one feeling much more than “okay.” Too bad, considering the strengths of some of the industrial edge and synth prowess Infestum is capable of displaying.