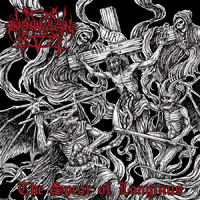 A card-carrying member of the old-school North American death metal club since 1999, Washington’s Infernal Legion make due with a simplistic, yet churning brand of death metal on The Spear of Longinus, their third full-length. As far as where to pinpoint this, it could go in a number of directions, yet the arrow points to the early works of Morbid Angel (i.e. Alters of Madness) and the duck-and-cover assault of Bolt Thrower, who for the record, really need to make a new album. So in terms of the necessitated crossbreeding, Infernal Legion has picked their spots wisely.

Realizing that it’s best to serve the main course at all times, Infernal Legion are smart enough to write compact

numbers that won’t come anywhere close to bedazzlement, but most of these songs are spot-on in terms of getting to the point. The band does itself some good by ushering in some quick and jagged melodies on “Wallowing In Your Own Faith,” all the while getting down and dirty on the cleverly-titled “The Immaculate Deception,” and ravaging “Volcanic Winter.”

To further accentuate the band’s DM cred, they make no bones about being anti-Christian, a main selling

point for the hanger-ons of Vital Remains and Deicide. Yet The Spear of Longinus is no Old Scratch dog and pony show; it’s an honet, ripping, full-frontal assault of primal death metal, taking us back to a time when being the most brutal band on the block also meant you had thesongs

to back it up. Heck, even the band’s promo photos are straight out of the early 90’s…glad to see bands are still doing their homework.