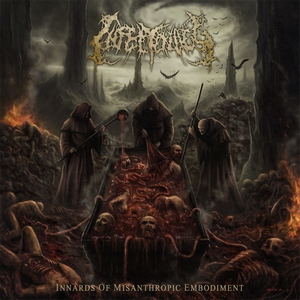 Sometimes albums better serve as time capsules. In the case of Infectology’s second album, it’s like instantly being transported back to the mid ‘90s, where brutal death metal reigned supreme. Not just any old brutal death metal, but kind of thing that steamrolled everything in its pathway in order to provide the most relentless and pulverizing experience they could muster.

Infectology has the mindset for one thing, and that is musical destruction. Viewing this album as a bulldozer means it would get an instant 10/10, as it is quite reminiscent of what the best the brutal death metal genre could offer – think of bands like Disgorge, Devourment, and all of their more brutal than thou ilk, and you’ve got a pretty solid idea of what this sounds like. Uber-low guttural vocals dominate the sound, with groovy, NYDM chugs and speed runs alternating providing the structure for which brutality is maintained. They get everything right down to the production itself, which in turn suffers from some way too high tin-can snare (to the point of distraction) – something a number of bands dealt with ‘back in the day.’ But there’s no excuse for it in 2016. Unfortunately, in keeping brutality as law, the songs tend to come up as a complete blur when trying to recall a particular track. It’s something the style often deals with, and there’s nothing here that pulls it towards any particular memories once it’s over.

Those looking for brutality above all will enjoy Innards of Misanthropic Embodiment, but the audience is notably limited. While it features the best of the genre’s strength, it also carries along all of it’s weaknesses as well. It’s a fireball for a few listens, but nothing you can dig further into it than that.