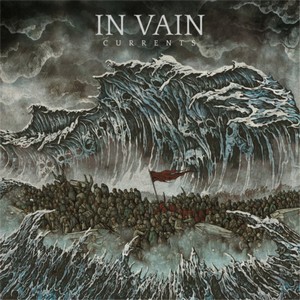 With five years separating In Vain’s last release, Ænigma, with Currents, there was certainly some time to develop some expectations for the band’s return. Continuing along in their progressive death metal structures, it feels that the band was feeling particularly adventurous when it came time to return. Oddly enough (but going along with the adventure theme), Currents presents a standard and ‘special’ edition, which alters the tracklisting (and hence the flow of the album). This review will look at the album through the special tracklisting.

Where Ænigma was a bit more instantly approachable, Currents finds itself in more progressive and nuanced listening territory. The band really tried to step out of the comfort zone, which is quite apparent even just looking at the first three songs (before the first bonus track comes in). Flowing and fanciful melodic death metal defines the opening “Seekers of the Truth,” with “Soul Adventurer” shifting into more melodic side, with a stronger emphasis on clean vocals (including an appearance from Trivium’s Matt Heafy), and the trifecta concludes with a more blistering and darkened death metal vision in the form of “Blood We Shed.” The first bonus track then hits back into more keyboard-friendly prog and near doomy levels with “And Quiet Flows the Scheldt,” an expansive and stunning track that feels odd to be labeled as merely a ‘bonus.’ The other bonus track a rather bleak and brooding one in the form of “Ghost Path,” which features some chilling acoustics along contrasting with thundering riffs. Elsewhere, “As the Black Horde Swarms” sees more of the earlier and blackened days rising more to the surface and the closer “Standing on the Grounds of Mammoths” swerves into Borknagar-esque progressive territory.

Clearly, there’s much to discuss about Currents, which may in fact be the point. In Vain are trying to cover a lot of ground, and despite the perplexing inconsistencies between the special and standard editions, it maintains a high-quality when it comes to songwriting. It may not be as immediate as Ænigma, but it’s an enjoyable release that’s worth the time investment in the end.