In Fury – In Fury (Self-Released) 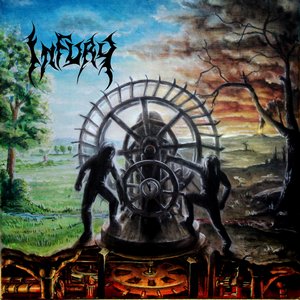 Ever long for the days where there was something magical about the melodic death metal genre? You know, the days when the guitar harmonies ruled above all, and upbeat yet thrashy melodies were of the “wow” variety. Ever spent countless nights hoping that In Flames would go back to their roots of The Jester Race/Whoracle majesty? In Fury was specifically designed for you.

Fans of early In Flames will be immediately familiar with the formatting that In Fury executes. But by no means is this a critique, as In Fury’s version of this type of material is some of the more impressive that this writer has heard in a while. The lovingly melodic guitar riffs, the acoustic breaks, the throaty rasps – it has the effect of transporting one back in time to the mid/late ‘90s, when this was the next big thing. Hearing the darkened but still “happy” melodies of “Utopia” or “Savage Beasts” are sure to bring a smile to many a face that can remember the time period, or even those who were late to the party. The galloping tone of “In Fury” and thrashy tone of “Reason” are sure to get your head moving (and toes tapping). Some great acoustic breaks also call to your attention, but it’s the instrumental wonders of “Subterrestrial” and “Celestial” that take it one step further – rather joyous stuff, in a very metal way of course.

Does it borrow from the In Flames wheelhouse? For sure, but they’ve also managed to capture that creative spark along the way, making sure that all fans of melodic death metal in its purest form will want to check this one out asap. Revel in the old school spirit and enjoy!