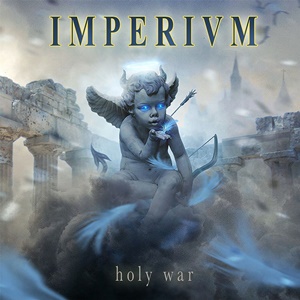 Power metal as a genre gives everyone a feeling of unity, strength, and often time travel either forward or back in history. Italian act Imperivm for instance embrace Latin/Ancient Roman ‘nicknames’ that infuse their real-world namesakes – making a stronger warrior-like impact that matches the music. Active since 2010, this five-piece have released two previous full-lengths locally before signing to Revalve Records for this third effort Holy War. What’s most evident regarding these eleven tracks are the anthem-like qualities that shape a lot of Teutonic influences past and present, delivering majestic riffs, proper keyboard hook support, and bombastic-oriented choruses full of choir-like charm – or audience support.

The guitar work contains that battle-charge thunder and semi-gallop textures, with the bass also adding that third low end support – aspects of Sabaton and Powerwolf come to mind when taking in songs such as “Second Triumvirate” and “Rain of Ash”, those cultural or uplifting musical parts that set hearts ablaze and produce unison applause. Imperivm would never be considered the fastest or most surprising in terms of tempos, song structures, and musicianship – they very much play in a similar pocket, casting out tales of history, battles, and honor as “Time to Fight” and “Brothers of Legion” attest by title alone. Vocalist Spartacus Thracius won’t necessarily be considered the most ‘on point’ high register guy in this style – his slightly accented warble gives himself that semi-bard element that could be like Bruce Dickinson in a lower register colliding into Hansi from Blind Guardian. Simple yet effective guitar harmonies and a building drum supplement signal the start of “3-Headed Monster”, a Helloween-ish type track featuring some killer lead break activity from Publius Sextius Leo and another uplifting chorus sure to cement itself in the power metal faithful. If there’s a bit of disappointment, it’s the squashed tones of the final product – the kick and snare have a distant nature to them that while sufficient could have been a tad more ‘powerful’ to elevate the finished sonic output.

Holy War contains all the bells and whistles one wants from triumphant, battle-tested power metal with German spirit at its helm. There are plenty of folks still clamoring for this style, so grab your swords and shields to go to town.