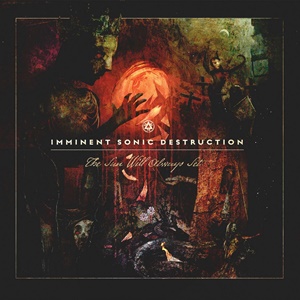 Starting in 2007 as Mellotrön, Detroit, Michigan is the home of progressive metal quintet Imminent Sonic Destruction. Still in the same incarnation as those original days, they’ve released two full lengths while gaining solid touring slots with Pain of Salvation, Fates Warning, and Circus Maximus to support those records. This third album The Sun Will Always Set comes out six years after Triumphia, continuing to display the wider array of influences that allow these musicians a chance to develop dynamic arrangements. Ensuring that track to track, the listener will find plenty to absorb, process, and reflect upon through continuous exposure at seven songs that range from 2:24 to 12:22 in playback times.

The contrasts often produce mesmerizing sections – where you will hear a low-tuned, heavier groove-oriented riff with spirited progressive drum fills or jazzy-like lead breaks, “Fledgling” the clearest evidence for both aspects. The ease of synthesizing djent/groove passages into a progressive metal/rock context proves Imminent Sonic Destruction can move from heavier to commercial-oriented sequences – creating very moving songs, especially when given the chance to expand on ideas to flesh out the deeper instrumental parts. “Nightshade” for instance may be Pantera-ish at the front end, but soon adds acoustic guitars, shimmering vocal harmonies, and fluid keyboard work against the normal electric proceedings to become something Dream Theater or Devin Townsend followers should appreciate. Even where the vocals hit can develop an off-time element that still works – “Source” featuring supportive extreme background voices, the main musical hook possessing this hypnotic, haunting atmosphere that sticks deep into the brain, while the musical interplay has a bouncy, semi-djent feel. Additional guest work from members of Battlecross, Leprous, Lady Luna and the Devil, plus Dragged Breath gives certain songs that extra icing to an already very diverse, moving record.

Where many progressive metal bands focus on virtuoso technical prowess, The Sun Will Always Set instead emphasizes an array of influences and obvious multi-part vocal harmony proficiency to separate the band from the pack. It should be interesting to watch the continual development for Imminent Sonic Destruction as there is obvious talent and abilities shining through.