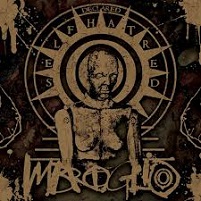 One of the true bummers about 2012 is the realization of just how porous the vocalist position in metal has become. Their value could not be at a lower mark, as evidenced by just how many bands take the easy route by employing a Mr. Screamy McScreamerson on vocals. These low risk/low reward type of moves not only uphold long-standing stereotypes about our preferred choice music, they also have what is now, the very annoying habit of making would-be quality bands like Ohio’s Imbroglio sound awfully pedestrian.

As it just so happens to be, Declared Self-Hatred is Imbroglio’s sonic swansong, with founding member D.J. Gilbert citing innumerable personal hardships surrounding the band as the cause for their demise. Their five-year run netted three albums and mounds of live performances, but like so many of their peers, Imbroglio got sucked into the underground grinder, never quite able to make it beyond cult, or sub-cult status. However, it’s much better to die young and leave a good-looking corpse, especially in the underground metal rat race.

On Declared Self-Hatred, there’s plenty of props to Today Is the Day, Botch, and other rusted sludge-meisters. Gilbert, who handles guitars and vocals, creates the necessitated sonic swirl to check the boxes in the noise department, as heard on the reckless “The Drought” and “Harsh Reality.” Yet, the preponderance of screams from Gilbert makes the album feel like you’re being barked at constantly. Gilbert’s vocals override a lot of the riff motifs put together, save for the chilled atmospheric drizzle of the back-end of “Sharp Teeth” and opening of “Everything Spliced.” There’s just too much roar and misplaced angry for the album to gain any footing, frankly.

More of a snapshot and sign of the times than anything else, Declared Self-Hatred puts an effective cap on Imbroglio’s career. Who knows, with some reflection and new direction, perhaps Gilbert can displace his emotions into a vehicle with more clarity than what is now, his old band.