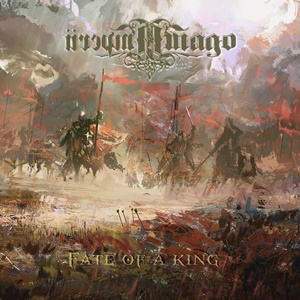 Born to forge metal based on stories and myths of the past, Imago Imperii hail from Bologna, Italy and have been a part of the power/epic scene since 2011. They’ve released a demo, EP and full-length during that time – also navigating natural growth/lineup shifts in the process. Vocalist Gwarner and keyboardist Ivanhoe are original members – while bassist Nick came into the fold last year. Fate of a King is the group’s second full-length, intertwining eight songs and three instrumentals spread out over the course of the track listing – sure to conjure up comparisons to the work of Blind Guardian, Iron Maiden, Stratovarius, and even Yngwie Malmsteen, although there are minor deficiencies that could leave them in the ‘cult’ category for a following.

Straddling the lines of speedy Teutonic power metal with bombast/uplifting choruses against some forward-thinking bass mechanics and neoclassical arpeggio-led guitar sweeps during the lead breaks, there’s plenty to appreciate on the musical front when taking in the spirited “Kingdom’s United”- while the doomy side of things takes over a la Candlemass / Memento Mori for the title track, Ivanhoe sprinkling in haunting ivory strokes to add proper ambiance. Additional old-world chants supplement the straightforward double kick-nature for “Conqueror”, although the instrumental section travels down an epic landslide featuring strange frantic guitar activities and wild keyboard tones. Flexing some progressive muscle in the longest cut “Harold Rex”, it’s where the maniacal warble of Gwarner makes things choppy and difficult to enjoy – he’s no King Diamond, or close to Hansi from Blind Guardian. It’s an area that definitely needs to improve if they hope to gain a wider reach beyond Italian shores – as there are too many uncomfortable vocal moments that could cause listeners to dismiss Imago Imperii, despite the obvious seasoning in the musical department.

The ancient garb the band adorn plus the throwback cover art tells you that the lyrics and imagery represent historical/legendary fare – a perfect match to the epic, power, symphonic metal style. When it comes to this genre, people expect quality in every aspect, and Fate of a King delivers only on a quotient of its potential.