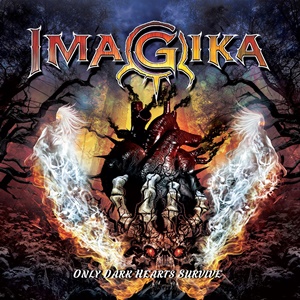 A product of a tumultuous domestic scene where metal received better critical acclaim and support overseas than in the United States, Imagika made a series of albums during the mid-1990’s to late 2010 of power/thrash (of which the third album And So It Burns probably received the most attention stateside with World War III as a label). Guitarist Steve Rice continued falling their demise with Kill Ritual, while their second vocalist Norman Skinner has been involved in his own activities including Niviane, Hellscream, and his namesake Skinner. Feeling the need to reunite the ultimate Imagika lineup and see if they could capture the creative magic once again, Only Dark Hearts Survive also contains King Diamond drummer Matt Thompson and bassist Jim Pegram.

Imagika style-wise embrace an old school power meets thrash aesthetic – the riffing robust, the melodies from Norman equal to the task in terms of sturdy low to mid-range potency along with the necessary higher octane screams or notes when called for, and the rhythm section work metal to the bone. Steve’s axe skills possess the perfect acceleration during the lead break moments while getting to the task at hand for the main riff foundation song to song – check out the mid-tempo groove monster “Suffocate on Hate” and the subsequent Jag Panzer/Vicious Rumors-like double kick anthem “The Spiteful One” as two examples of his versatile, exemplary playing abilities. You get a sense that these veterans reach back into some of their early influence archive in spots, being a product of the Bay Area thrash movement as well as early Y&T, UFO, Armored Saint – making a catchy offering like “The Faceless Rise” a second half barnburner as Norman switches between hypnotic, semi-drone verses and his natural power delivery. Keeping the proceedings at an eight-song, 36-minute clip means the listener isn’t subjected to half-baked ideas – this is the best of the bunch, and keeps aligned with those mid to late 2000’s records that made the Normal/Steve-era well regarded for those in the Imagika world.

Vicious and aggressive with melodic thrash/power songs, Only Dark Hearts Survive picks up as if the band hasn’t been away since 2010 – and that’s a good thing to these ears. Now let’s hope this isn’t the last that we hear from Imagika, as they can still create and deliver quality albums for those who like sturdy US metal with killer musicianship and performances.