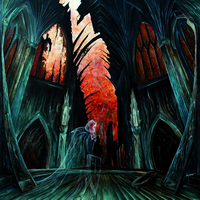 Death metal has a tough time with melody. Incorporate too much of it and you’ll be called a ‘melodic death metal’ band. Don’t put enough in and you risk putting out 8 versions of the same track. It’s a fine line to add just enough melody while keeping things decidedly brutal. But only on their first release, Finland’s Illusions Dead seem to have the idea down pretty well, despite some familiar elements.

Illusions Dead’s brand of death metal does owe some of its embedded melodic qualities to that of black metal. It’s not overly blackened (other than some of the vocals), but some of the injected melodies carry a black flavor that keeps things legitimately heavy, but at the same time allowing for some needed moments of melodic freedom. “Hour of the Raven” exudes this frigid feeling of melodies quite well from the start of the track. In this day and age, the band Anata doesn’t get cited enough as a reference point, but this was a case that they were. Thankfully the reference is genuine, in the band’s ability to crank out some rather heavy (and fast) riffs that keep a melodic edge is nicely done. “Devoured by Hatred” and “Revolution (Celestial Spheres)” both nail the frantic speed element while retaining an ear for subtle melody beneath. The material is firmly lodged in the death/black ethos, but it never causes anything to feel stale thanks to the memorability of each track.

An impressive debut, Celestial Decadence does make sure that brutality is never sacrificed for the sake of sheer melody. Heavy from start to finish, but you’ll want to tap your toes at the same time. Continuing in this form will undoubtedly lead to some great word of mouth; let’s just hope they can keep the balance just so.