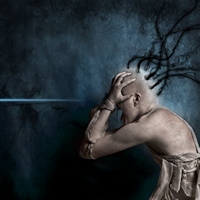 Progressive death metal (as the case with any time the term ‘progressive’ is used to describe any band), tends to be a broad stroke. It doesn’t have to mean “melodic death metal,” nor does it have to mean “technical death metal.” It seems to be something that’s just a bit different to every band. With Illusionless, we are presented with some pretty heavy and aggressive material, but with some melodies that you can sink your teeth into.

Age of Kali is the band’s second release, and should find favor with most fans who enjoy anything with ‘death metal’ in the tagline. There are some points of really heavy and chugging mid-tempo riffs, upticks in speed with a penchant for more underlying melodies amid the thrashy tempos, and even a bit of atmosphere. They also try their hand at a few tastefully injected ‘clean-er’ vocals that never undermine the more sinister tone of the tracks. “Malevolent Manifestation” even employs some solid groove into the format, with some forays into subtle synths and atmospheric melodies/leads as the track progresses. Instrumental breather “Alethia” effectively combines some synths with riffing at a higher level and comes off as a nice stepping stone to what they could accomplish in other tracks in the future.

Whether you want your death metal with melody, brutality, or otherwise, Illusionless have served up an EP worth checking out, without watering down any of the elements involved. For a fairly new band, there’s a clear level of competency here that would be at home with a much more veteran act. Plenty of potential to tap into with future releases based on what Age of Kali has to offer.