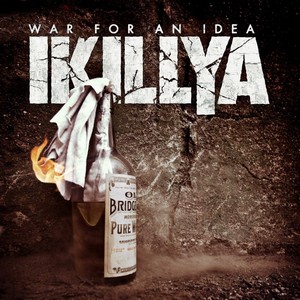 New York City’s Ikillya has been been slowly moving up the rungs since their 2011 debut Recon. The beginning of the month saw the release of their third album, War for an Idea, which continues the aggression and thrash-fueled antics the band has come to be known for. But in increasingly abrasive times, some no-frills adrenaline is exactly what the doctor has called for.

Ikillya shoot straight and go immediately to the point in their assault. There’s no overthinking it – this is modern thrashy material (think of bands like The Haunted or Product of Hate) that favors vitriol, but grasps the idea that hooks also have their place. Are the songs a bit angry? Absolutely, and DR wouldn’t have it any other way. Tracks like “Your God” are easy to get behind with their massive boosts of energy. But it’s the hooks and groove that keep the band from being a one-trick pony, and what makes War for an Idea have some longevity to it. Some ripping solos refresh the landscape as well, but you are hard-pressed to make it through one track (excluding the 2 interludes) without finding some riff to latch onto. “My Hands Around Your Throat” and “Starve” stand out in this regard, using a visceral edge but still finding a way to insert hooks without watering down the formula.

Third time is indeed the charm for Ikillya. War for an Idea is a hard-hitting effort that should serve as a fine release for all that pent-up aggression bringing you down. One of those cases where the sheer force of will (and belligerent melodies) should be enough to convince any naysayers that this band is the real deal.