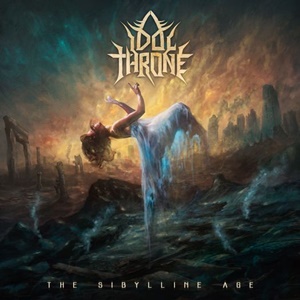 Not very often you hear a US metal act from Indiana that intertwines influences from power metal, thrash, neoclassical and traditional spectrums while also incorporating specific aspects of 90’s progressive metal – but that’s what you get to enjoy with Idol Throne. Originating in 2018, they released a debut demo Proof of Life last year, setting the stage for their debut album The Sibylline Age. Teetering between the vintage, organic aspects of the movement while also using some of the superior technology tools of the trade (mixing and mastering duties handled in Austria and Germany respectively), prepare yourself for an energetic adventurous outing, a host of US and European influences melding together to deliver a winning, catchy formula.

The rhythm section work of bassist Alex Barrios and drummer Aaron Grove navigates deftly from all these cross-sections in terms of subgenre. Whether it’s more power/progressive for “The Labyrinth”, Judas Priest/Iron Maiden-esque during “White Wolf” or neoclassical with sturdy power a la King Diamond meets Liege Lord in the heart pounding closer “Power and Control”, their work allows the guitar play and vocal melodies to travel far and wide based on the song’s atmosphere and feel. Guitarists Martin Bowman and Jason Schultz waste no time getting into melodic harmony interplay and dazzling heads down rhythms for the Heathen meets Cyclone Temple-esque thrashy “Unholy Warrior”, while executing killer runs and lead breaks for the almost eight-minute instrumental “Last Full Measure”, the pacing and shifts familiar to those who love the work of Iron Maiden, Metal Church, and a bit of Dream Theater. As great as the musicianship is, the ideal confidence booster to convince even those sitting on the fence for quality will be the soaring, multi-octave prowess within the voice of Jake Quintanilla. He has that mountain top confidence, bellowing from lower to highest registers much like Jake Rogers of Visigoth pushed through a late 70’s/early 80’s New Wave of British Heavy Metal angle. His versatility shines on the closing eleven-minute plus title track, where an acoustic/electric aural dance takes command, key off-tempo shifts and strong rhythms keeping interest on high, the speedier / gang vocals spots bringing about more power/thrash highlights against some Blind Guardian-esque textures.

This is a gem of a band for those who want professional musicianship, diversity, and dedication to the heavy metal cause while setting about a sound that just isn’t heard often enough in 2022. Idol Throne through The Sibylline Age will be gaining more underground attention, hopefully leading to key festival appearances and mini-tours to position them higher in the scene – as this is high quality material that will not be forgotten anytime soon.