I Exist – From Darkness (Prosthetic) 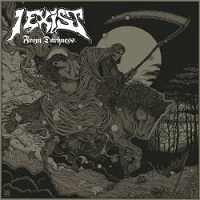 From Darkness is a challenging listen. Not technically or progressively challenging, but because it’s all over the place. The record kicks off with “Lightning Curse,” a super fast and aggressive metallic hardcore tune of the crusty variety. Raw and heavy guitar tone with hoarse vocals over a quick galloping drum beat, sounding akin to early Tragedy or even Skitsystem with a bit of that Swedish d-beat vibe.

Having never heard the band and being completely unfamiliar, they quickly had me hooked. Then all of the sudden, about a minute in, it takes a turn. They hit the brakes and it slows to a creep with a bluesy metal riff that comes completely out of left field. It picks up a bit as the song goes on but it never gets back to that pace they started with. “Heal Me In Smoke” follows and is almost an exact replica of the first track, ultra fast metallic hardcore that slows and by the end has morphed into a completely different tune.

With “Sorrow On Hill 105”, they totally abandon the hardcore tendencies demonstrated earlier and dive straight into the stoner metal realm. A groove-driven tune that ventures off into a trippy, ambient, instrumental interlude before finding it’s way back to a heavy riff that wouldn’t sound out of place on a track by The Sword. The album continues going back and forth between tracks heavy on the stoner and even sludge side of things, while some try to take it up a notch with a little speed.

Unfortunately it all starts to get a little repetitive and stale. “Fool For Death” finally closes things out and is probably the strongest track, but it just ends up sounding like a repeat of much that came before.  Point being: It’s not that I don’t want to go along for the ride, they just don’t seem to know where they are going.