I Am Destruction – Nascency (Unique Leader) 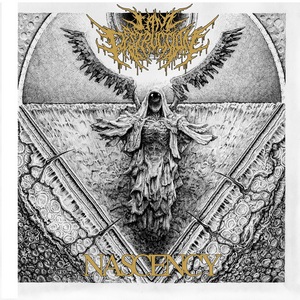 Blurring the lines somewhere between deathcore and brutal death metal, I Am Destruction give us their first full-length in Nascency. Originally a one-piece act of Stephan Mashburn, the band has since expanded into a four piece band in the last few years. While Nascency isn’t going to completely take the world by storm, it’s a mostly solid effort for the band to build on in the future.

The lumbering tone that I Am Destruction takes at times is where some of the deathcore influences take root, along with a more modern production. The churning riffs that make up tracks like “Propagated by Abnormality” see the band mostly sticking to the mid-tempo chugging. But thankfully, they avoid tossing in a bunch of unnecessary breakdowns, instead focusing on putting in some notable emphasis on making sure that the riffing is memorable, and inserting some melodies and upticks in speed when it’s appropriate, and called upon by the track. Some tracks bring in some rather melodic guitarwork amid the heaviness, such as “Divine Infestation, which is quite effective in making the tracks work. That said, the reliance on more mid-tempo stuff does start to make the latter half of the album (sans the instrumental track) a bit homogeneous – though much of the death metal realm is also guilty of this particular fault.

If you are looking for heavy, I Am Destruction do now how to bring it. Nascency could use a little more tempo variation to really catch the listener’s ear over the long haul, but nonetheless the band is off to a solid start in their implementation of melodies (and avoidance of breakdowns) to give them more of an individual identity.