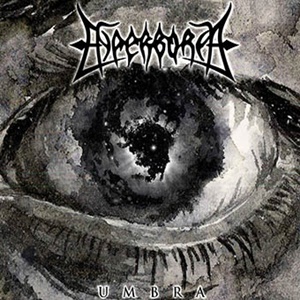 Arising during the government upheaval of the late 90’s, Bulgarian death metal band Hyperborea took influences from their first wave of metal domestic scene along with a love for international death/thrash acts and started creating their own music. They released two albums to date with Architecture of Mind (2004) and Cryogenic Somnia (2007) through domestic labels and have been dealing with work/life/ lineup changes ever since – finally signing to Art Gates Records and releasing their first album in twelve years for Umbra. Considering no previous exposure to Hyperborea prior to this record, it’s obvious the band has serious talent and ability to combine a mixture of US/European influences to create a highly addictive, semi-progressive and groove/hook driven death affair.

The rhythm section can go through these aggressive blast-beat bursts and sick, thunderous fills as the double kick activities pummel any competition – check out drummer Antonis Trochopoulos at his high octane best during “Silent Stream” and then follow it up with a mix of groove/thrash mechanics against his death blitzkrieg angles for “Supremacists”. The forceful, rhythmic patterns from vocalist Dancho Ivanov give a militant atmosphere, his growls surprisingly intelligible a la Max from Sepultura against Johan of Amon Amarth – up to the vicious charge right away on the energetic “Home of My Misery” and offering that alternative angle during the slower, Obituary-esque riff measures for the verses of “Two Extremities”. You’ll even get a bit of Pestilence-like jazzy guitar interplay during “From Within”, while the closing track “Atavistic Fear” features more progressive Scandinavian nuances in the guitar/bass departments, at 7:29 the longest track to expand Hyperborea into another dimension through diverse and dynamic segments which shift in mood and intensity from doom/death to progressive groove/metal as well. It’s obvious throughout the band has affinity for Florida death like Obituary and Morbid Angel but also appreciates acts like Pestilence and Sepultura to separate themselves from being just a brutal/heavy style of artist.

It’s refreshing to hear bands like Hyperborea still developing new music in kind of a subgenre that isn’t exactly the most preferred against the intricate tech or old school, HM-2 driven fare. Because of this Umbra will find deep dive listening for years – and hopefully carve out a decent following for the band.