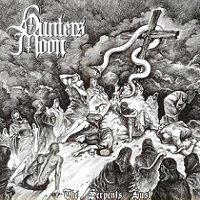 Classic, grim death metal from Down Under, Hunter’s Moon were discovered via a demo tape by the fledgling Hell’s Headbangers. Yeah, a demo tape. Who knew those things were still in existence? Very black metal. Or very cult-ish. Either way, this debut EP comes to embody the spirit of the HH label, thus providing us with another classic-sounding slab of vintage death metal.

The band plays it very close to the vest (which is probably loaded with Bathory and Autopsy patches) , culling right from Quorthon’s first three efforts and most mid-80’s death metal. The riffs are decidedly simple, evil (“A Light In the Abyss” would be nice and snug on either the first self-titled Bathory or Blood Fire Death) and production is non-existent. Some rolling, nod-inducing tempos are introduced on “Baphoment,” while some acoustic guitars add some atmosphere to closer “Last Rites.”

Not in the slightest bit mandatory, Hunter’s Moon benefit from their out-of-the-way locale, which in the past, has produced the revelatory likes of Destroyer 666 and The Berzerker. It helps generate a sideways view to death metal, which could hopefully lead to more exploratory things down the road, but for now, the very derivative The Serpent’s Lust EP will have to do. For total purists, into total death…only.