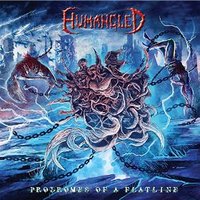 Sometimes, there’s no discernible difference between death metal band #459, and death metal band #712. (Surely you can tell those are arbitrary numbers.) And that’s fine – the style can be restrictive to a fault, which means bands need to get creative to be noticed. Or, they could just write good songs. For Italy’s Humangled, it’s a little from both buckets on their second album, Prodromes of a Flatline. (DR looked up what a “prodrome” is: It’s an “early symptom, indicating the onset of illness or a disease.)

The band is very much cut from the Tampa and/or Scott Burns-o-rama, just without the reverb overload the once-famous producer was so prone to using. There’s an even distribution between technicality and simplicity, as evidenced by the fancy bass noodles on “4:03” and the barbaric bashing found on “Men of Straw,” and “Vegan Realm,” which is an odd choice for a song title given death metal’s propensity for all-things manly and carnivorous. (Then again, several members of Carcass are vegan, so go figure.) Nevertheless, the rhythmic, turnstile bashing on “Forestated in Flesh” hops over to Cannibal Corpse circa Gallery of Suicide and beyond territory, while the quasi-syncopated thrust of “Fragments” finds footing with Human-era Death, then heads into Suffocation blast-off realms.

Composite death metal bands – and there are a lot of ‘em – are too often to prone to latch onto their core influences and never let go. In the case of Humangled, they’re somewhere in between on Prodromes of a Flatline. The Italians, on occasion, display some wry nimbleness and cohesion; other times it’s just a regeneration of Florida from 25 years, which in some cases, is totally up people’s alley. Nevertheless, keep a loose eye on Humangled. They may end up surprising some folks…or not.