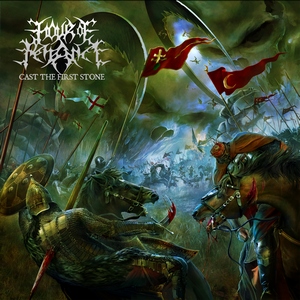 There’s always something that can be said about consistency. Bands that have maintained a certain level within their music – regardless of the times and can be relied upon for what makes them tick. Cast the First Stone is Hour of Penance’s seventh album, and it does exactly what you’d expect it to do – knock you over like a freight train.

Hour of Penance have long established their frantic and speed-driven approach to death metal that blurs technicality with outright brutality. Nothing has changed for Cast the First Stone, and one wouldn’t expect it any other way. “XXI Century Imperial Crusade” kicks things off and does so with the same level of intensity and precision that you’d expect from the veteran act. A devastating pile-driver of an opener sets the stage for things to come. But as one should also be aware of, Hour of Penance has a keen ear for melodies below the radar, which the track also employs in some subtle synthwork to add to the grandeur of the track (which is also used in a number of the songs). The title track opens with a rather catchy dual guitar harmony akin more to NWOBHM than tech death and serves as a rather memorable riff. “Hour of Flies” weaves in some mid-paced harmonies into it as well when the band eases off the throttle. Other tracks like “Shroud of Ashes” and “Iron Fist” use some infectious hooks within the chaotic framework to ensure the listener is never at a loss for something to catch their ear.

Cast the First Stone continues Hour of Penance’s consistent streak of providing a first-rate death metal experience that satisfies the technical, brutal, and even melodic aspects without compromise. A tightly focused album that never fails to hit the mark and provide a level of death metal bludgeoning that you’ll still be drawn back to after the initial adrenaline rush wears off.