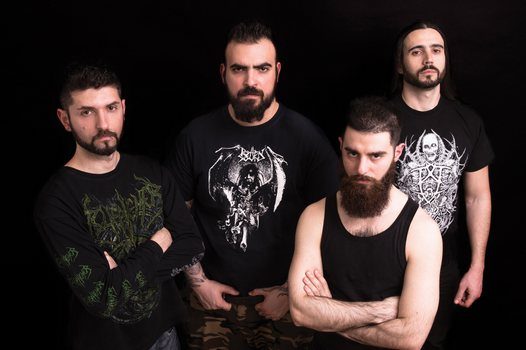 One of the longest-running death metal bands to emerge out of Italy, Hour of Penance emerged at the turn of the century and has been going strong ever since. They’ve moved through a few labels over the years (they’ve been with Prosthetic since 2012’s Sedition), but if you talk to anyone, Hour of Penance is most known for playing death metal at a blistering pace. This year’s Cast the First Stone, the band’s seventh studio album, continues their long-standing tradition for technicality and velocity.

A veteran act that still plays with the thirst and vigor of a younger band, Hour of Penance continue to be just as caustic and energized on their most recent output. As it could be expected at this point in the game, it’s all about crafting better songs rather than experimentation – it’s clear Hour of Penance’s knives are still rather sharp. So we reached out to guitarist Giulio Moschini and guitarist/vocalist Paolo Pieri, who touch upon the influences for their seventh album, where their inspiration continues to come from, as well as a peek at what’s to come this year on the live front.

Dead Rhetoric: Cast the First Stone is your latest effort – was there anything different that you were trying to do with this album than your previous efforts?

Giulio Moschini: We wanted to take some time off from the live activity in order to spend more time writing the album and focusing especially with the recordings in finding the right sound for it. We worked together with our bass player Marco [Mastrobuono], who’s also the man behind the mixing desk for Cast the First Stone, [spending] countless hours trying different amplifiers, different microphones, and mic techniques until we found the perfect equation and mostly important we’ve tried to avoid plugins and over abused studio technologies as much as we could because they make most of today’s bands sound sterile, especially “modern” death metal bands.

Dead Rhetoric: Seven albums in, where does your drive for death metal continue to stem from?

Moschini: We’re still very passionate about listening and playing death metal. Nothing has changed since we’ve started playing with this band and the best part for us is bringing our music on stage. We had a lot of great experiences while on the road and we’re keeping ourselves pretty busy in 2017.

Dead Rhetoric: Does it get tougher as you continue on, with regard to having to one-up your previous releases?

Moschini: We always write our new albums like it’s the first one, we don’t pay much attention to our past releases in fact I believe they’re very different from each other. If you go around and ask our fans which is the best Hour of Penance album you’ll get a lot of different answers because of that. Of course after spending hours and hours playing your own songs you realize that there are things you could have done better but we’re not taking notes about this or that; we just sit and record whatever comes to our mind and we keep working on the ideas that we believe have the potential to be part of a new album. It’s a very natural and stress-free process: nobody tells us how our music has to sound except for us – like I said before, we love death metal and we’re fans of our own music so when it comes of writing a new song we are very picky and we would not put out a record that could disappoint us and our fans.

Dead Rhetoric: On the other hand, are there some things that end up being easier to do over time?

Moschini: We definitely developed a pattern in the process of writing new music. I record everything here in my home studio, drums included and then once the song has a proper structure we start discussing about what to change and what not with the other guys – Technology plays a big role here, thanks to the computer we can already have an idea of how the songs will sound like when they will be recorded in studio and we can literally work on the songs note by note.

Dead Rhetoric: Cast the First Stone has some conceptual basis rooted in the Crusades – what are the parallels that you see with today’s world?

Paolo Pieri: The world is so different right now, we Europeans lived a tragedy like WW II and it made us realize that something like that must never happen again despite all the problems we have. On the other hand, the Middle East is a real danger for our peace, in some areas they still talk about crusades, infidels – they went back to the middle age kind of thinking. We need to remind ourselves that we earned our freedom through the age of enlightenment and reason, not through religion and ideologies, and we have to preserve our rights. We must avoid becoming like them, giving in to fear and anger, otherwise we’ll go back to being crusaders.

Dead Rhetoric: The album was also influenced by events such as the terrorist attack at the Bataclan – was it surreal that you had been playing there recently before the attack?

Pieri: Yes, looking at the Bataclan full of dead bodies and blood was shocking, it could have happened to any of us if we played in the wrong night. Something like this must not happen ever again, that is why everyone must take a stand against any fundamentalism.

Dead Rhetoric: The topic of religion is something you’ve never shied away from as a band, right down to your band name. How do you view the role of religion in society?

Pieri: Religion is something dangerous, because it uses the ignorance and weakness of people to make them the pawns of the power play of the elites. Religion must be something that helps the weak and poor people and seeks peace and tolerance, otherwise it is just manipulation. If a religion wages war and seeks wealth, it’s not religion, it’s just politics and must be eliminated.

Dead Rhetoric: How did growing up in Italy affect your view of religion?

Pieri: Well, when I was a child my grandmother told me about the guardian angel who followed me everywhere and looked at everything I was doing, and I was so scared of this; it was like a haunting presence. I think this made me suspicious of religion and I did not want to take any sacrament even as a child.

Dead Rhetoric: Being one of the larger metal acts from Italy, what do you suppose has fostered a larger number of national bands from the region, outside of the Internet?

Moschini: Aside from the Internet, labels helped a lot, at least for us, signing with Unique Leader Records back in the day and now Prosthetic Records has helped us grow and getting known from more death metal fans. Italy unfortunately is not a fertile ground for death metal bands – turnouts at shows are poor and most of the venues are slowly closing.

Dead Rhetoric: What would you like to see Hour of Penance accomplish that you have not been able to achieve yet?

Pieri: Personally, I am very happy with everything we have done. It was my dream as a boy to play shows around the world and record good albums, and we realized all of this. I just would like to see less piracy in the metal scene – we worked hard to do this and I believe that people should be more supportive in this way. Our albums cost as much as a cocktail or a couple of beers; I don’t think anyone will become poor if they buy our music if they like it. We’re not U2 or Madonna who don’t give a fuck if they sell a couple million less albums, it is they only way we can keep doing more music.

Dead Rhetoric: Are there any shows that you’ve done that you have particularly fond memories of?

Moschini: Definitely the Hammersonic festival in Indonesia. We’ve played in front of 10,000 people although I’m nearsighted and for me it was like playing in front of 10% of that. But yeah I have great memories of that show!

Dead Rhetoric: Do you have any solid plans for touring or festivals after the album’s release?

Moschini: Of course! We’ve already started playing the new songs live and we’re trying to book shows in areas where we never played before here in Europe, like Greece, Romania, Macedonia…we’ll have some special shows that we’re going to headline like the Bristol Deathfest in April and that’s going to be a UK exclusive for 2017…a lot more ahead in the agenda!

Hour of Penance at Bandcamp