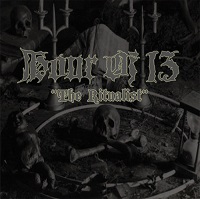 The scene changes often as the debate rages forth between the studio versus live experience in the metal realm. As a lifelong admirer of both, there’s something magical when all the elements align to produce that timeless, irreplaceable platter, and yet just as unique, can be that gig seared into your eyes and ears that will be talked about for the ages. Since I’ve yet to witness Hour of 13 live, let’s just say my first taste of The Ritualist conjures up those feelings of an outstanding doom-laden heavy metal act ready to make their mark on the world at large.

All the sounds you hear on these eight songs come from the minds, hands and feet of two individuals: Phillip Swanson and Chad Davis. The latter handles all the guitars, bass and drums, while the former sings

, and these guys understand how to write dripping doom anthems with the right tempo giddy-up and traditional punch to keep the throngs happy and shouting forevermore.

“Possession” contains those early Sabbath meets Trouble ringing power chords against Swanson’s chilling, mysterious melodies that have an air of British quirkiness. Then you have “The Crawlspace,” a 8:58 closer with distinctive old school Maiden guitar

melodies (think “Phantom Of The Opera”) and drumming in line with other NWOBHM luminaries. Lyrically, Hour of 13 are all about evil, sorcery and the world of Satan, so prepare yourself accordingly as titles like “Demons All Around Me” and “Evil Inside” explore the macabre with interpretative storytelling.

The opening riff sequence in “Naked Star” could be a contender for best in 2011, one that would make the Judas Priest or Mercyful Fate guitar tandems beam with appreciation. Obviously to pull this off live they need three additionalmusicians

, but in record form, Hour of 13 certainly straddle that late 70’s/ early 80’s metal ethos like a fine locomotive ready to steamroll anything in its path. 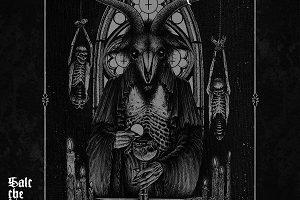