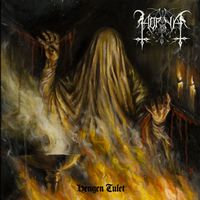 Long-running stalwarts of true black metal – Finland’s Horna have returned with their ninth (!) studio release since releasing their first demo way back in 1995 (for perspective, the same year bands like Windir and Taake were also dropping demos, and Blut Aus Nord had released it’s debut album). Seems like a long time ago, and indeed some of these aforementioned bands surely went on to release works considered seminal to metal’s black underbelly. Well what about Horna? To those in the know, the band has been a pretty constant bringer of ugly darkness and raw blackness through their career, perhaps not delivering classic works that might enshrine the band into the infernal halls of black metal fame – yet delivering, nonetheless.

2015 Horna is untainted and unspoiled Scandinavian black metal, the way it really ought to be. Holding the torch high, perhaps along with other like-minded bands like fellow Finns Sargeist and Behexen – Horna does not stray far from the formula that put the genre on the map: blasting drums, tremolo picking, tortured and venomous vocal delivery, a funerary mood with hardcore punk rock spirit.

Tracks such as the furious and muscular “Puhdas” display a little bit of diversity in the record, opening with some rare melody by way of a haunting organ, and moving into a bludgeoning track with some nice hardcore leanings, to keep the adrenaline pumping. Really, when the band is maybe at it’s strongest here is when this punk ethos is on display, again in the melodic/singalong-ish “Sodan Roihu”.

True to form, all words involved with the band are in Finnish, so best of luck if you feel the need for lyrical comprehension and don’t parlez-vous Finnish. It’s of no concern however, for if you are a fan of the genre, then you get the deal. Sometimes it’s refreshing to listen to a new album that’s pretty pure in spirit – exactly what Hengen Tulet is. Clear (not exactly clean) production allows the fuzzed bass lines to shine a bit, along with rock-solid drumming, properly simplified and subtly melodic guitars, dependable songwriting and commanding vocals have earned Horna another success.